Charlie and I traveled to the country in February after being away for almost a month! We flew in from Washington DC on Friday from a business trip and made a straight shot to the country on Saturday! Danielle, Raya and I drove over to College Station for a baby shower for Natalie and Jason and Charlie took care of business on the property. Jason has been working on building a fence for the entrance from the road. It is looking really nice. It will lead from the road to where we will put our house. 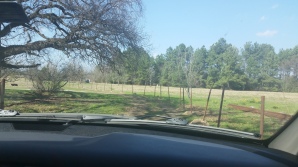 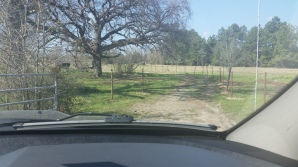 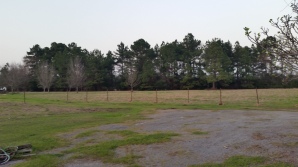 We made a second trip to the country a few weeks later and discovered that we had a new herd of cattle in the “Back 50.” The fellow that is running cattle on the property had replaced most of the cows with a younger group. This group is smaller and much friendlier. Natalie convinced one of the new heifers to eat hay from her hand! There are a couple of the “originals” there – they are loud and bossy! 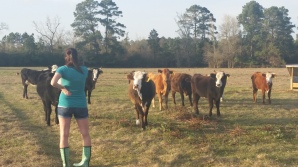 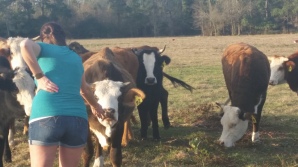 At the end of the month, we made another trip to Lovelady. We had some family business to take care of that week but had some time to spend on the land the weekend before and after. Unfortunately, it rained most of the second weekend but I was able to get out and take photos of the trees that were budding out.

Earlier, the narcissus and daffodils were blooming but now with the others budding, I am hoping to be able to identify the trees that I don’t know. Some of the plants and trees I can identify but there are others that I’m at a loss about. I am starting a “plant journal” to help me identify the plants and chart growth. The land has a large number of pecan trees and we were told there are three peach trees (somewhere).  I’m excited about being able to plant some fruit trees in the future.

I also found a few paw prints along the way! Can you tell which animal they belong do? 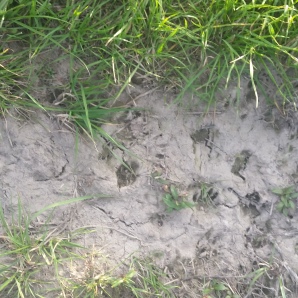 One of our favorite things to do is “walk the property.” (That’s what they say in the country.) I love going to the pond and seeing how it changes with the seasons.

We also have a creek running through our property. It’s difficult to get to right now – we need to clear out some of the underbrush. Here are a few photos from our last visit.

We made some good memories in February. Be on the lookout for details of the next trip down the Wheeler Country Road in a few weeks!